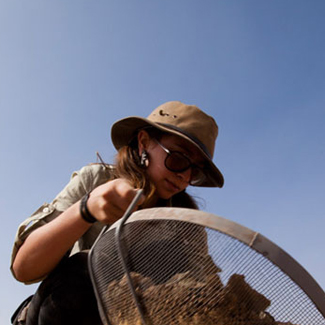 Lauren Conroy joined Paul’s Lab team in 2011 after graduating with a Masters of Science in Biomedical Visualization from the University of Illinois, Chicago. During this program, Dr. Sereno was on the research committee for her project on endocast reconstruction and rapid prototyping of fossils.

Lauren accompanied Paul on the 2011 and 2012 Expeditions to Niger. She is an instructor for the Jr. Dinosaur Science Program and accompanied them to the field site in Shell, Wyoming in June of 2013. She is also an guest lecturer for the Jr. Biocurator Program, teaching classes on Photoshop, laser scanning, segmentation from CT Data, and basic animation to the students.

Previously, Lauren attended Virginia Commonwealth University where she received a BA in Communication Arts with a concentration in Preparatory Medical and Scientific Illustration in 2009.

Revolving Skulls and Endocasts from Lauren Conroy on Vimeo.