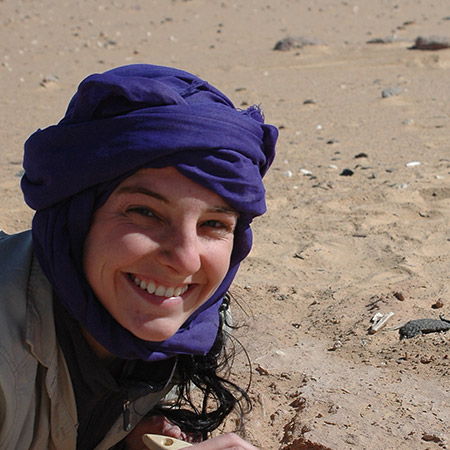 Erin has had a lifelong passion for dinosaurs and art which professionally began following high school when she became a volunteer fossil preparator at Chicago’s Field Museum over a decade ago. Not just capable in the lab, she also accompanied Dr. Lance Grande and Dr. Peter Makovicky on trips to Wyoming and Utah digging dinosaurs and fossil fish and later accompanying the Burpee Museum of Natural History on several Hell Creek digs as well.

In 2007, Erin received her Bachelor of Fine Arts with a concentration in Graphic Design from the University of Illinois at Chicago and in that same year started working as a fossil preparator and paleo artist for Dr. Paul Sereno at the University of Chicago. In addition to preparation, Erin’s artistic talent, underpinned with a scientific focus, has given her the opportunity to do molding and casting and flesh-model reconstructions of Raptorex, Rajasaurus, Suchomimus and more, some of which have been displayed in museums and exhibits around the world. She is also a guest instructor for the Jr. Biocurator Program teaching students photography and Photoshop techniques. Thanks to her previous field experience, Erin has joined Dr. Sereno since 2008 on numerous trips to Wyoming and also to Niger in 2011 on an expedition to the famed Gobero site.

When not in the lab or the field, Erin often spends time at home making drawings and paintings of dinosaurs. Some of her amazing illustrations such as the renowned Jane and Sue have been sold in auctions.