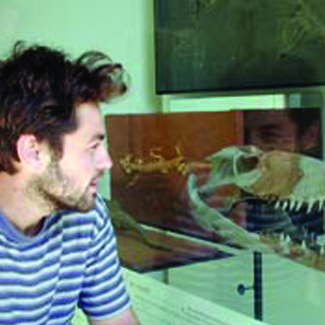 Dr. Pol obtained his doctorate degree at Columbia University in 2005, where he focused on the global radiation of a poorly understood group of dinosaurs using novel computer-based methods for documenting morphology-based phylogenetics. Dr. Pol then undertook postdoctoral studies at a mathematical institute at Ohio State University, where he worked on the efficiency of phylogenetic methods using parallel computing architecture. In 2006 he accepted a research position supported by CONICET at the Museo Paleontológico Egidio Feruglio Trelew, a new and growing institution located in Chubut, Argentina.

In his 70 published papers, Dr. Pol has devoted his scholarly work to the (i) morphology of Mesozoic archosaurian reptiles and (ii) theoretical underpinnings of phylogenetics and historical biogeography. Regarding the former research area, he has published extensively on fossil crocodilians and dinosaurs, many derived from his expeditions in Patagonia. Some of his publications describe new and unusual species, such as plant-eating, snub-nosed crocodilians with novel jaw mechanics or dwarf dinosaurian plant-eaters with caniniform teeth. Others describe key transitional forms, such as the earliest long-necked dinosaurs known as sauropods. In his second area of interest, he has outlined the applicability of new methods of phylogenetic analysis based on probability and outlined new approaches to untangle the complicated biogeographic history of the southern continents.

Both of his long-term interests are engaged in the proposed plan of collaboration while a visiting scholar on campus, where he would study an extensive collection of fossil archosaurs in the Sereno Lab, work on new methods and analyses in paleobiogeography, teach a very interesting seminar on current quantitative methods of analysis in systematics and historical biogeography, and speak to the large community of evolutionary biologists in the Evolutionary Morphology Seminar Series.

Morphology in Time and Space

This course outlines the latest methods and problems in analyzing morphological data—or the “characters” of organisms—in phylogenetic time and in geographic space.  What is a character?  How can character data be used to generate trees, study evolution or understand ancient biogeographic history? The course considers fossils with no ancient DNA, which record 99% of the history of life. The single weekly class period is divided between lecture and lab, the latter emphasizing real problem sets.