When Paleontologists mount dinosaur bones they try to capture what the dinosaurs would have looked like when they were alive. That’s why most dinosaurs are mounted in dynamic poses: walking, running, attacking or defending.

When Sereno’s team prepared the bones of the juvenile Jobaria, a surprising discovery came to light: something had bitten the juvenile and left tooth marks on its ribs!

Afrovenator was the dominant predator in the region at the time and its teeth were found at the theropod site. Dr. Sereno concluded it was likely the bite marks were made by Afrovenator the “african Hunger,” that had attacked the juvenile.

Based on this fascinating discovery, Dr. Sereno decided to mount a juvenile skeleton of Jobaria alongside an adult skeleton warding off an attack by Afrovenator.

Not that long ago paleontologists would have rejected the notion that a 20-ton sauropod like Jobaria could rear up on its hind legs.

Paleontologists argued that these giant animals – the largest sauropod probably weighted about 80 tons — lived their whole lives in the water, where they could wade around with less effort. paleontologists couldn’t believe that such big heavy animals could support their own weight.

Today we know that sauropods could support their weight and did walk on land. While it’s true that sauropods are very heavy, their bones are also much more robust than similar bones in today’s large living animals such as elephants. Futhermore, sauropod skeletons like _Jobaria) are found in land, not water, deposits. But the most convincing evidence comes from sauropod trackways: these preserved footprints show that sauropods must have walked on land.

But could 20-ton Jobaria stand on its hind legs, supporting all that weight on just two legs? To answer that question Dr. Sereno turned to …(can’t read) 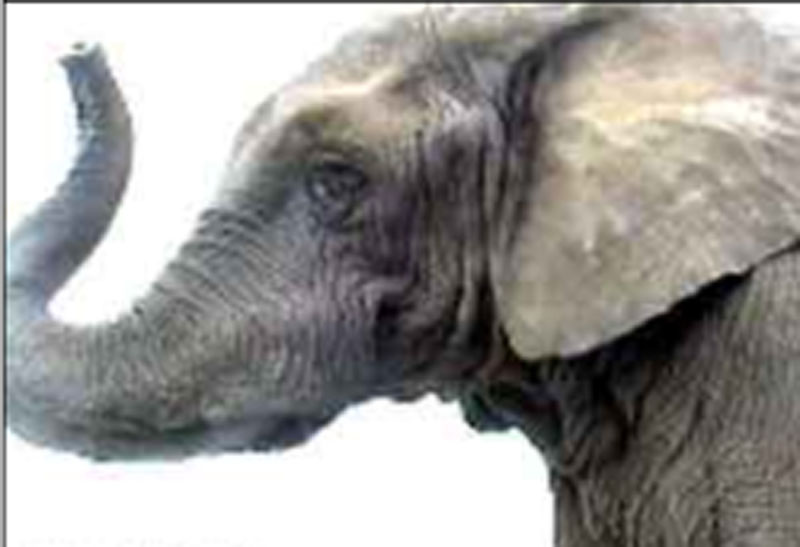 The talented 20-year-old elephant, Angus, who helped Dr. Sereno. Angus is under the care of gifted animal trainer Michael Hackenberger.

Why compare Jobaria to an elephant?

Elephants rear on their hind limbs occasionally in the wild. They perform this feat regularly in captivity. By studying how an elephant rears on it’s hind legs, Dr. Sereno hoped to better understand how Jobaria would stand on it’s hind legs.

To rear up and hold a hid leg stand, the center of mass of the elephant (or of Jobaria ) must be balanced over the hind limbs.

That’s when Dr. Sereno decided to weigh Angus the elephant. At 12,800 pounds, Angus is the largest African Elephant in captivity. He resides at the Bowmanville Zoo, just outside Toronto, Canada.

But where do you weigh an elephant? 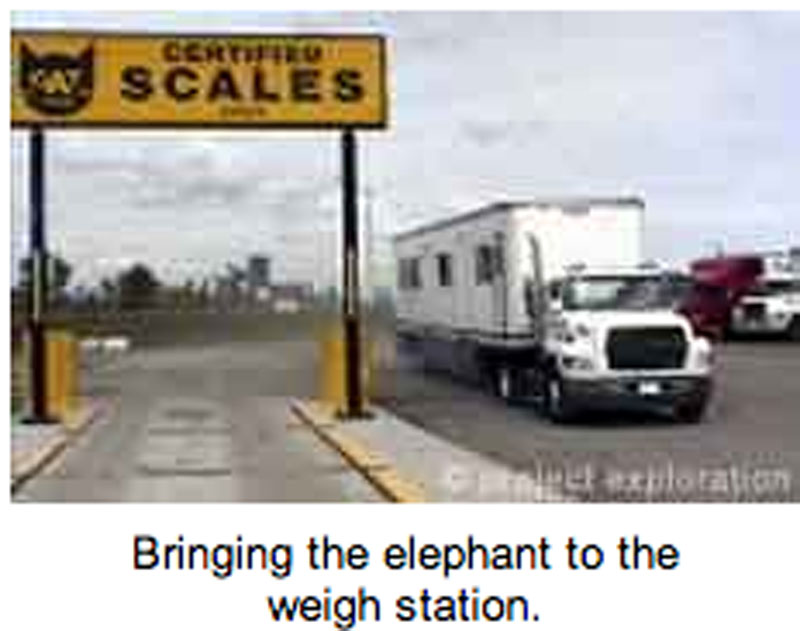 A good place to weigh really heavy things is the scale at a weighing station for trucks. In fact, the scale is designed to weigh front and hind axles separately. Angus only needed to stand on the scale and Jeff Ogradnik and Dr. Sereno would have an answer to their question: Where is Angus’ center of mass?

Dr. Sereno discovered that Angus carries almost 60% of his weight on his front feet and only 40% on his hind feet. The forefeet carry about 7,600 pounds, or almost 4,000 pounds (2 tons) each!

Based on the weight report, Dr. Sereno knew that Angus’ center of mass was forward in his body, closer to his front feet than his back feet. Angus has a large head and a puny tail, so it makes sense that his hind legs carry less weight than his front legs. To confirm this finding, SEreno and Ogradnik measured elephant limb bones and found that the circumference of the front leg bone (the humerus) was one and a half times bigger than the circumference of the back leg bone (femur). 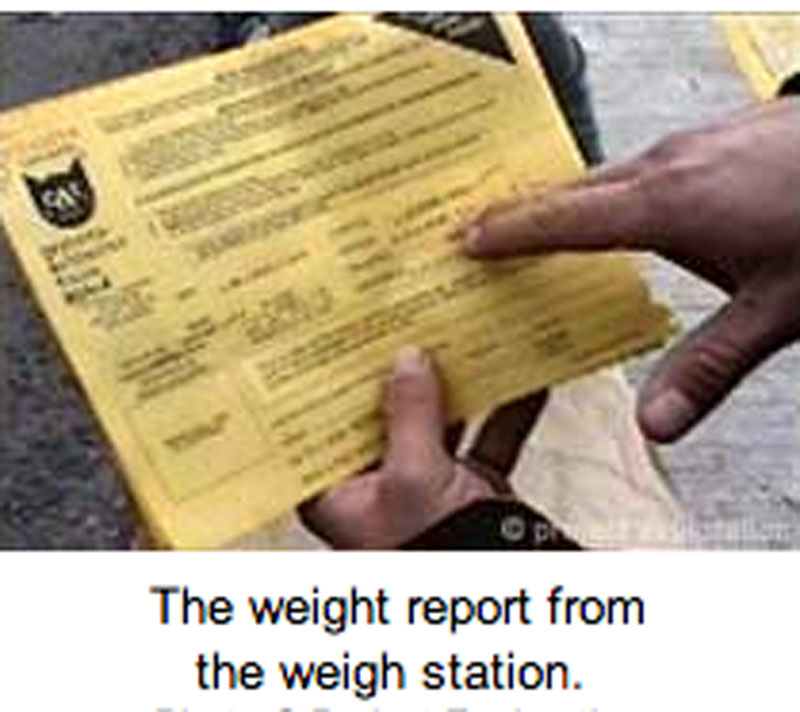 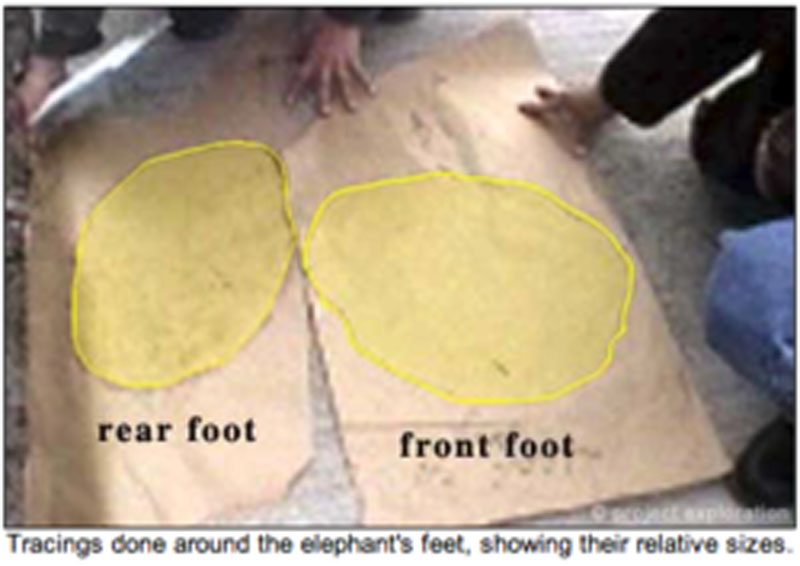 While working with Angus, Dr. Sereno and Jeff Ogradnik noticed that the sole of the forefoot was much larger than the sole of the hind foot. The difference was nearly 1.5 times — the same difference they measured for the weight of the limb supported. That means that each sole is designed to carry the same load per unit area.

Footprint size, therefore, is a good estimator for the amount of total body weight carried by a limb.

As with limb circumference, sauropod footprints show the opposite condition to elephants. The hind print is much larger than the foreprint, confirming that most of the body mass of a sauropod like Jobaria was in the rear, borne by the hind limbs. 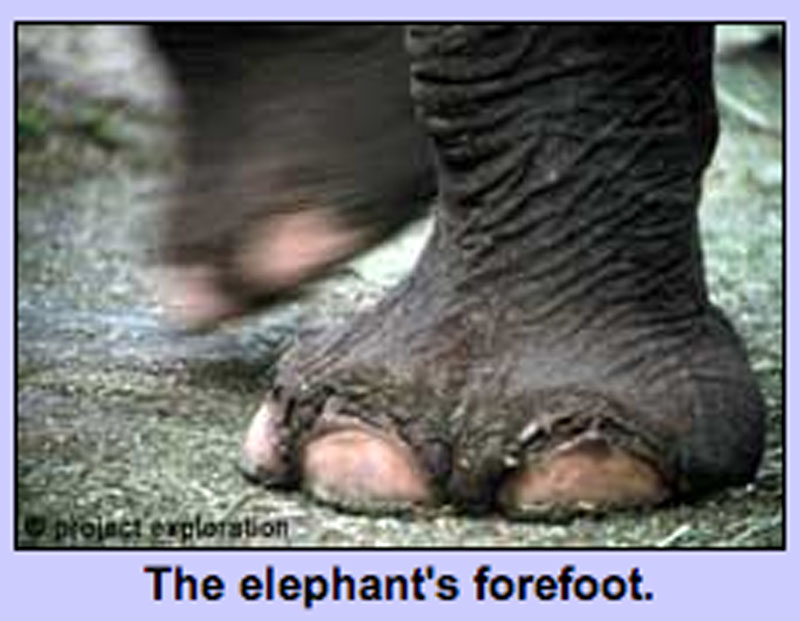 Dr. Sereno’s objective with the mounts of Jobaria is to create realistic poses that capture something important about the athletic capability of Jobaria. The hind leg stand for the adult seems quite possible, based on a comparison with Angus the elephant.

What about the pose of the juvenile skeleton? Here we see an animal at a stiff walk. Notice how closely the feet are positioned under the body. Dr. Sereno was particularly impressed by the speed, agillity and balance of Angus, the 12,800 pound elephant. His great sense of balance is shown by how close his feet are to a midline when he walks. Sauropod trackways, likewise, are narrow and suggest the same sense of balance for sauropods.

Dr. Sereno is convinced that Jobaria was capable of walking faster than a human being can run, rearing on its hind legs, and moving with a great sense of agility and balance.

The old view of sauropods as clumsy, water-bound behemoths is wrong, as are museum skeletons that pose sauropods as if they were wide-legged. 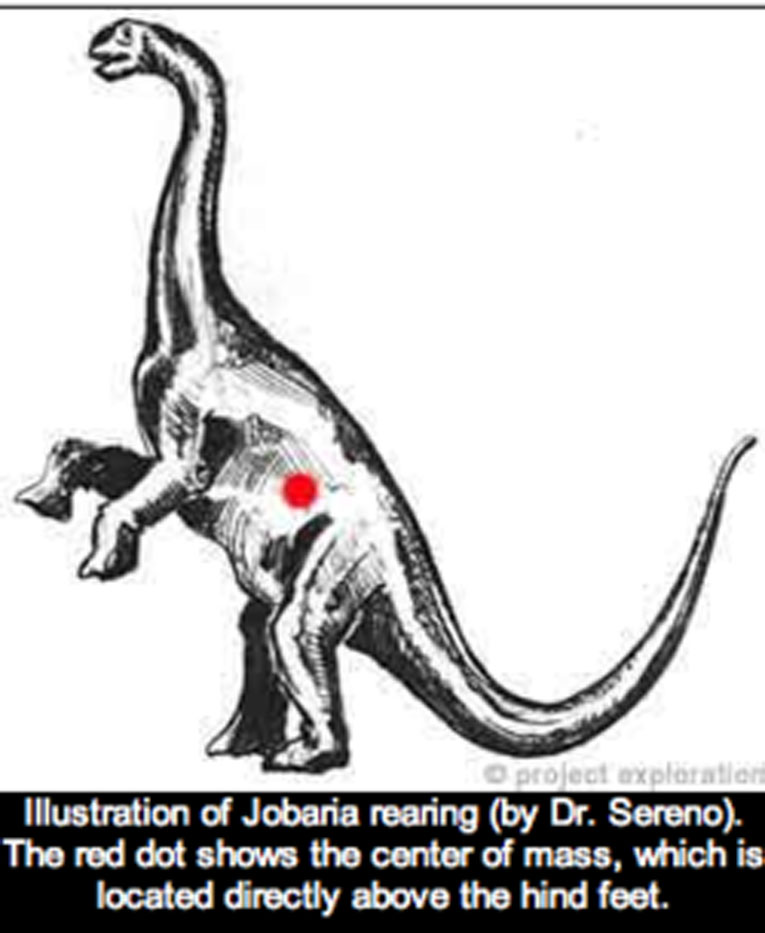 An elephant has a more difficult task in performing a hind leg stand than Jobaria. The elephant’s center of mass is closer to the forelimbs than the hindlimbs – exactly the opposite of Jobaria. Bone measurements and footprint size confirm that Jobaria would have had to move its center of mass onlly a short distance backwards in order to rear up on its hind legs.

But could its main hind leg bone – the femur – withstand the bending force generated by the hind leg stand? Or would it snap? Using a computer-modeled sauropod and a bent-knee pose similar to that of an elephant (shown in the illustration here), Jeff Ogradnik was able to show that the bones of Jobaria were up to the task. It would take a mass almost three times greater to snap Jobaria’s femur.

Dr. Sereno’s research has led him to conclude sauropods like Jobaria were agile, graceful, and much more flexible than paleontologists have traditionally though.

So look at Jobaria in its rearing pose: you are seeing a snapshot of how this dinosaur could move.